Walking home from the station in the gloaming, something catches my eye –
a partridge! It is sitting stock still on a low wall that divides the yard between the garage and the agricultural machinery workshop where they make fantastic Heath Robinson contraptions that either plant or harvest potatoes. Maybe both. The partridge (a red-legged partridge, according to my book) is stunned, by a predator perhaps, or passing traffic, and has somehow found itself sitting on the wall. Did it fly there? Or has a kindly passerby placed it there, out of harm’s way.

It doesn’t look as if it has been harmed – there are no obvious injuries at any rate. And, apart from being in a daze, it looks in fine fettle. Plump and clean, the white feathers crisp against the black. And such a pretty face! Soulful eyes, the dramatic black stripe and flashes of red. I am tempted to take its picture, but it seems disrespectful, given the circumstances. Nonetheless, it is a rare treat to be able to get so close to a wild bird. Usually, all you see of a partridge is a whirring of wings and its backside as it flaps up from the undergrowth, startled by your approach. But this bird’s misfortune is my gain. We look at each other some more – me in wonder, the woozy partridge most likely not seeing anything at all. I stand a while longer before leaving it to its fate. This morning, as I trudge off to the station on my daily commute, I pause to look, just in case it is still there, but it has gone. 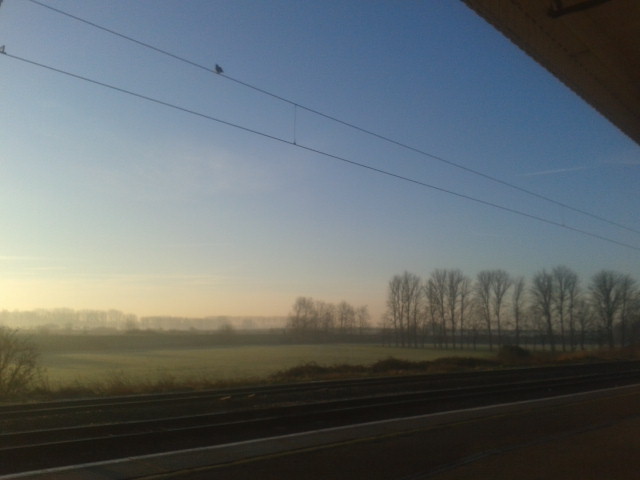 It’s a lovely morning. The light is unearthly, the low sun revealing the world gradually, by degree, as it rises above the horizon. Shadows are long. Buildings and trees are lit up and picked out against the dark background – almost glowing, given an unreal quality on this still and windless day.

And it is against this otherworldly backdrop that a curiosity presents itself. The train eases out of the station, heading south under the new bypass, and the landscape opens out onto vast fields. Out in the middle lie the remains of what must have been a hedgerow, now a patchy line of bushes and shrubs. In one of these bushes, an illuminated tableau has assembled. A buzzard, its brown feathers rendered golden, sits at the apex, supported by a magpie to its left, a foot or so down. Two deer complete the picture, lying in the grass, front legs tucked underneath and heads up. They are all motionless, enjoying the pale warmth of the February sun, for all the world like some kind of bizarre nativity scene. The train is picking up speed now, and the odd bedfellows are left behind, leaving me to wonder whether their companionship is a longstanding arrangement or just a fleeting coming together on this beautiful morning.