I have, in my loft, a box of keepsakes – old tickets, football programmes, postcards and letters, an ancient packet of Russian fags, beer mats and so on. Last night, whilst searching for some photos, I was surprised to come across two bits of paper folded together. One was a reader’s card for the All-Russian State Library of Foreign Literature on Nikoloyamskaya Street in Moscow (card number 071532, valid until 31/12/2000) and the other was the address of a man called Kiril Alekseyevich. The discovery of either on its own would have thrilled me, but to find both together seems uncanny. They are both deeply evocative.

Twenty years ago, on a cold crisp January morning, I walked from Red Square to the Kitay Gorod (Moscow’s China Town) and on, down the hill towards the river. I was a teacher, and not a very good one, so it was a relief to be away from the classroom. The day was bright and cheerful, with a low winter sun forcing me to shield my eyes, and I felt that familiar but rare (can it be both?) thrill of anticipation surge through me. I was heading for the “Inostranke” (the Foreigner – the Muscovite name for the Library of Foreign Literature). I have a vague memory that the official reason for my visit was to find the British Council offices in order to see what teaching materials they had that might be useful. However, the real reason was in order to spend a morning reading the British newspapers and to check up on the football scores. But I was also on a mission to find something in Welsh for a colleague who approached languages in the way I might approach a crossword. He would take a text, unpick it and try to unravel and understand it – often without a dictionary. He was extremely bright, deeply arrogant and had some rather odd predilections. We haven’t kept in touch. 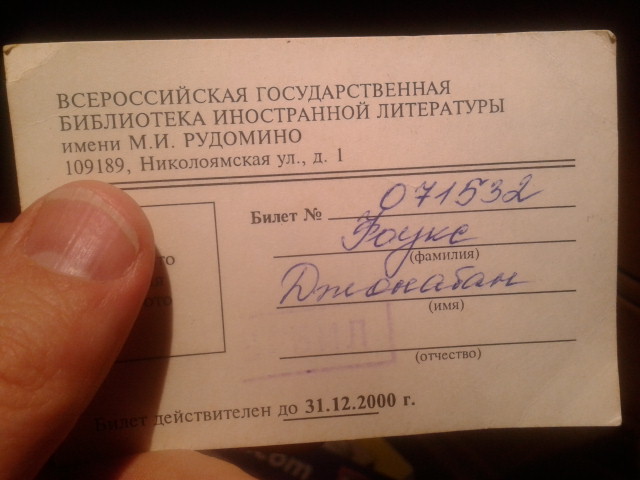 Slightly nervously, I entered the library – a grim slab of a building and went to the desk to register. I had low expectations. I already knew something of Russian bureaucracy and fully expected to be refused entrance. But not today, this most perfect of Moscow days. The woman behind the counter, with the slightest of raised eyebrows, completed the paperwork and issued my ticket before pointing in the direction of the Welsh books. I walked down a bright sunlit corridor, unexpectedly so given the bleak exterior, and found the Welsh literature section. It consisted of a single book.

I couldn’t take the book out, and there was no photocopier, so I found a quiet spot and copied out the text of a few poems. Moments of pure happiness are rare in life, but this was one of them. I finished my work and read them over, enjoying what I imagined they might sound like if I could read Welsh, and packed them away. I returned the entire corpus of Russian held Welsh literature to its place on the shelf and headed back out into the sunlight. A little way up the hill I found a stall selling shashlik, the hot greasy meat sizzling over a brazier, and stood to eat (the tables were chest high and had no seats), mopping up the fat with a wedge of black bread and a beer. It was one of those blank piece of paper moments, with the whole world and all its opportunities and possibilities laid out before me.

Some months later, I was back in Moscow. It was now spring and the wide streets were dusty and dry, free from the dirty grey piles of snow that had finally melted away. It was a beautiful day, fresh and invigorating after the long old winter. I had come in to the city and ridden the metro south into new territory for the purpose of seeking out a Russian archaeologist who would, I had been assured, be very happy to discuss with me the possibility of my spending the summer on a dig. I was nervous – not unreasonably, for this was an interview of sorts, but also excited. Once again, the sense of something wonderful just over the horizon twisted my stomach – a delicious feeling of anticipation.

My destination was a quiet educational institute of some kind – a nondescript building, much like any number of the schools I had been working in, but with the odd hint of grandeur. Linoleum was the norm in these places, but I was walking across a parquet floor to the reception. I was directed up the stairs, and trod lightly for fear of disturbing the hush of the rarified atmosphere. The office was on the first floor and I knocked on the heavy door. My host was surprised to see me, and then startled when I tried to explain why I was there. He seemed alarmed and began to pull on his mackintosh – he explained that he had to be somewhere, and regretfully would not be able to discuss this with me. I asked when might be a better time – he looked at me and asked me what experience I had. I had to confess – none. I hurriedly explained that I was a historian, of Russian history! I would work voluntarily and was keen to learn as I worked, but it was too late – the die was cast and I had failed my interview.

Kiril Alekseyevich had gone and, with him, my hopes of an idyllic summer deep in the Russian countryside. I played the conversation over in my head endlessly in the days that followed. What might I have said differently? Could I have been bolder, or less bold perhaps? Should I have worn a tie? Maybe I should have given him advance warning – to those that had lived through the Soviet Union (five years gone, but in name only – many of the practices and attitudes lived on) strange foreigners turning up unannounced could be a frightening thing. I felt bad for scaring him, but annoyed too for not being given a chance. But most of all, I was angry with myself for blowing the chance. I came down the stairs and emerged back out into the street, cursing; I briefly considered running after him but ruled it out, accepted things for what they were and, with a heavy heart, set off for the station and the train home.

One thought on “The All-Russian State Library of Foreign Literature”