I know an island. A magical place, a smudge of green grass rising out of the bluest of seas, where white sand turns the water turquoise as it washes the shore. The colours are easy on the eye – it relaxes the mind. It is a place of refuge and sanctuary – burdens lift and worries float away as you sail across the Sound and approach the jetty. Here is calm. Leaving will be a wrench.

I was there not so long ago, despite various weather and transport calamities that seemed to be conspiring against us. Biblical rains washed away the railway line and then the clutch failed on the car. For a while it looked as if we were going to be marooned on the mainland. In the end, beyond-the-call-of-duty kindness came to our rescue in the form of a lift, and deposited us on the quayside at Oban – my six year-old daughter and me, ready for adventure. There was even time for us to picnic on the dock and watch the little boats come in, laden with lobsters and crabs – the creels hauled up by two women, sleeves rolled up and faces burnished by wind and sea.

Soon we were away, leaving the troubles and complications of the real world behind us. The crossing was millpond smooth, a barely perceptible swell carrying us through a picture book seascape of cheerful boats, lighthouses and so many seabirds, ruined castles standing sentinel on the dramatic coastline. To the north, distant mountains arranged themselves to form the Great Glen, one of them Ben Nevis – a fact which failed to impress my fellow passenger. Instead, she been excited by the magnificence of our boat, with its small shop and cafe. Seeing the stairs leading to the upper deck, she exclaimed, “Oh Dad, it’s just like the Titanic!”. “Hope not” said a member of the crew and, before long, the little ferry, icebergs notwithstanding, had arrived safely in Mull.

It is a glorious day of blue skies and a cloudless sky – it’s hot! The bus journey, surely one of the most beautiful there is, and which I have written about before, is a joy – a ninety minute meander along the single track road that winds through Glen Maw and out the other side, finding Loch Beg and following the coast down to Fionnphort. You can see the island now, across the Sound – gleaming in the sunshine. And, oh the smell! Of the sea, of the sheep, and the clean air! It tugs at my heart. Soon I am dozing on the beach, feeling the warmth of the sun on my skin and listening to the squeals of the children playing in the water.

The weather catches up with us overnight and I am kept awake by the high winds and lashing rain. Daylight brings something more typical – a proper changeable island day. It might be pouring down but, out at sea, shafts of light are breaking through the clouds and you can be reasonably confident that it will stop raining in a moment or two. Then, up on the hill in shirt sleeves, basking in the sun whilst watching the rain move up the Sound – before you know it the sky is black and you are drenched. At one point today, I could pick out individual buildings on Tiree, windows glinting – over twenty miles away! Later I couldn’t see Mull, less than a mile over the water. 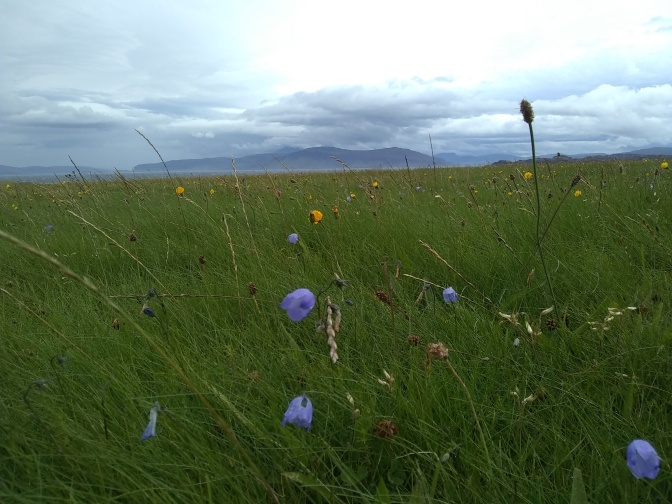 After breakfast we set out to see the whale. We follow the road up to the North End, through a gate and out onto the close cropped grass. The sheep are now elsewhere, and something akin to a meadow has grown up – flowers in their thousands are dancing in the breeze. The island is alive. The rain, the first in some weeks, has encouraged a more unexpected bloom. Many hundreds of snails, thirsty for moisture, have emerged from the dark places in a strangely spectacular display. They are everywhere, and I pick my way through them, enjoying the springy soft turf under my feet. Grass gives way to sand, and our attention turns to the unfortunate whale. 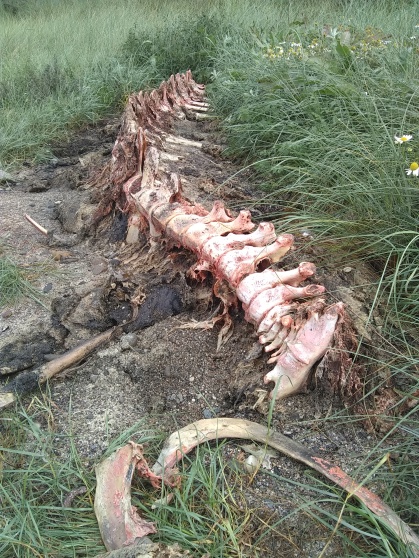 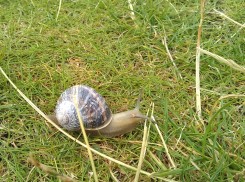 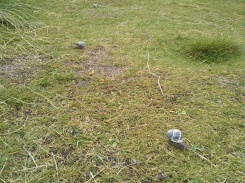 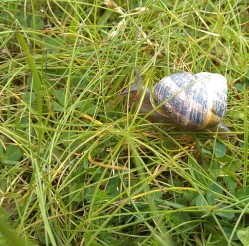 Probably a minke (albeit a small one), it was washed up in a storm last November – I first saw it over Easter. The smell was overpowering then, the flesh decomposing into a black oily sludge. Later that day I saw a dolphin out at sea, leaping and twisting – it seemed almost impossible that the whale would have once been doing something similar. Today the smell, whilst still intense, can only be detected when close up. The bones have been picked clean, and the black residue has largely gone. Scavengers, either seabirds or souvenir hunters, have removed most of the skull, but the once mighty spine stretches out in front of me. The kids look, screw up their faces at the whiff, shrug and head off to the rock pools – a live shrimp beats a dead whale any day. However, I stay, and try to imagine this beast into a live thing, swimming free. I can’t, of course, but consider that as resting places go, you could do a lot worse than ending up here in this sheltered cove with the timeless sound of the waves rolling in over the rocks. My turn to shrug and, with a sigh, I head over to the rock pools. 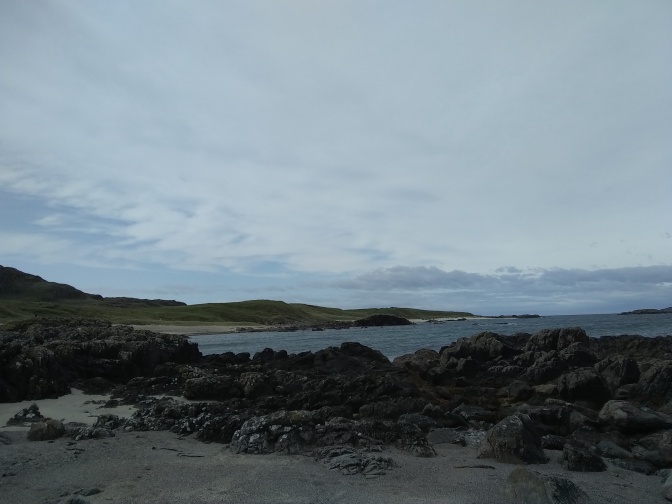 One thought on “The Snails and the Whale”