A friend was driving her mother through Ireland this summer and, as they tootled along, she was telling her the names of the rivers they were crossing. And her mother, now in her seventies, said, “Every time we went for a drive, my Dad used to stop at the rivers and go and check on the fish. Funny though – he never actually went fishing.” Then, at a remove of seventy odd years, she gasped, “Oh my God! I’ve just realised it was a euphemism for going for a pee!”.

I love that. A joke, made by a man who has been dead for a quarter of a century, remains alive long enough to raise a laugh seventy years after the telling. “What will survive of us is love.” Or jokes. Something similar happened after my grandfather died. On account of its song, he always referred to the Coal Tit as the Saw Tit. I think we just assumed this to be the old Sussex name but it dawned on us, years later, that it was more probably a case of him pulling our legs. I can almost see him saying it, utterly deadpan, but his eyes twinkling with devilment.

The idea of people living on in some form after their death is deeply pleasing. I don’t believe in God, or the after life, but I am very happy that the essence of a person can continue in some way or another – be it a joke, something remembered, a physical feature or expression in a child. The latter is especially good – what intrigues me is the child repeating the mannerism of a relative it can never have met, or the slow realisation that your own expressions may be an echo from a long departed ancestor. Every year, when I sow my tomatoes, I see my other grandfather’s hands – something about the way I use my thumb to move the seeds around the palm of my hand. And who’s to say that this wasn’t a gesture that came from his grandfather before him!

There is a delicious observation in Melissa Harrison’s “At Hawthorn Time”, where she notes that the starlings, who mimic the sounds around them, are still reproducing the chink of the blacksmith’s hammer on anvil. So, amongst their modern repertoire of car alarms, reversing trucks and telephones, they are carrying the memory, handed down from starling to starling, of a noise long gone from the countryside. In the most unlikely of places, the call of a starling, the ancient sounds remain alive. Similarly, Bruce Chatwin tells of sitting on a beach of one of the Scilly Isles and watching bees fly in from the sea to collect nectar. This was puzzling – by all accounts, bees can’t smell across the sea, and hate travelling across water. So much so that a study of the migration of bees around London showed that when they cross the Thames, they do it by flying over the bridges! It occurs to him that they are coming in from one the neighbouring islands and that they are most likely following an ancient route that predates today’s high sea levels. There was a time when the islands had a land connection but, as the seas rose and the gap widened, the bees carried on following the old routes. The memory is stronger than the evidence in front of them. And now they will fly for four or five miles over water. Most un-beelike!

I think about Chatwin’s bees fairly often – usually when I am walking around the back of the Cathedral. Because there you will find, about thirty feet up on the south side of the Presbytery, a row of gargoyles. One of these, a fearsome beast roaring at the firmament, has, for as long as I have lived here, been the site of a bees nest. Look up and you will see a steady stream of bees buzzing into and out of the gaping mouth. But for how long has this been going on? This part of the building has been up for 800 years – did the gargoyles go up at the same time? One would assume so. But how long before the bees discovered it! Have they been there the whole time, or is this a recent development?

Much like the Cow Tree, it is a major landmark in my mental map of the town, especially with small people in tow. As we pass, I point out the bees and, over the years, various children have stared in amazement, politely or otherwise. I never fail to marvel at the bees’ presence, and worry each spring that this will be the year they won’t be there. They have become auspicious. Do they hibernate and stay put over the winter (in what must be one of the safest places for a bee to nest)? Or do they go elsewhere and come back in Spring, having remembered the location? And do they remember as such? Does instinct play a part, or is there a yearly waggle dance, passing the knowledge down from generation to generation.

It doesn’t really matter – much like the ancient jokes of our ancestors, and the starlings’ fading recollection of the world before the internal combustion engine, the cathedral bees are keeping something of the past alive. It is a deeply reassuring thought. 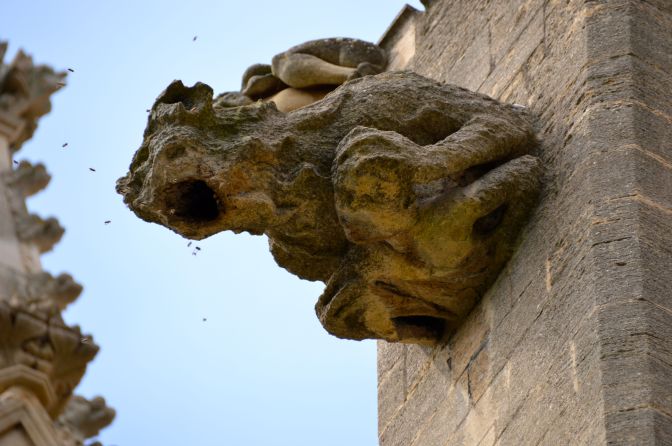