An unexpected perk of working the bar of a country pub was getting to know a pair of rascals who, amongst other things, took me on my first mushrooming expeditions. Sam Barnard, sadly no longer with us, and Fred Berwick, of the neighbouring parish, would lead me on long rambles in search of the rare and the exotic. We must have made for a curious trio – Sam stooping and angular, Fred with a gnomish beard and Rumplestiltskin gait. As for me, a quarter century younger than my companions, well, the less said the better – awkward comes to mind. Sam and Fred knew the area like the back of their hands and, whilst little was said on these walks, much was imparted – and I was grateful for their company.

This was a generous thing that they did, because they were usually highly protective of the places where they found their treasure. There was a competitive aspect to this – Sam in particular knew (and kept close to his chest) a site on the Downs where he would harvest the most enormous field mushrooms, and Fred devoted a lot of time trying to find it. It was not unusual for Sam to turn up in the pub, grubby polythene bags overflowing with more mushrooms than he could possibly eat – purely, I suspect, to show off. This fungal Shangri-La assumed mythical qualities, generating huge amounts of discussion and speculation in the pub. One night Fred came in early and, with an uncharacteristic twinkle in his eye, took his beer and sat waiting in the corner of the bar. It wasn’t long before the door burst open with Sam bellowing, “where’s that effing Fred Berwick!”. Sam continued to vent incoherently and, as Fred was helpless with laughter, it took a while for the truth to out. He had, of course, found the spot but, instead of harvesting the mushrooms, Fred had taken his penknife and carved “FB” into each and every one.

This comes to mind today as I walk along the footpath that follows the riverbank on the Suffolk side of the Stour. Because, there before me, is an extraordinary sight – dozens of dinner plate sized Parasol mushrooms. One thing I learnt from Fred and Sam all those years ago was the wonderful earthy, almost meaty flavour of these most beautiful of fungi, but also of their comparative rarity. Perhaps this is a Sussex thing, but they were few and far between and I have since only ever found a handful. So this is astounding and quite thrilling. Unfortunately, the strap on my bag collapsed as I set out, and I left it in the car. Which leaves me here, surrounded by the kind of feast you can only dream of, with nothing to carry it in. Obviously, I could just carry a few in my hands, but I still have 8 miles to go – I consider it briefly but it is a daft idea, so I walk on slightly frustrated but excited. I know where to come next time!

It’s a filthy day – the deluge is and has been relentless. I am bespectacled and can’t see much through my rain spattered glasses. So when there is a quick movement on the ploughed field beside me, I don’t immediately recognise what it is I have just seen. I have to squint before I can see the pied wagtail, and then another, and another! In fact, I can see loads of them – there must be thirty. I’ve seen this kind of thing before – once down by the river in Ely I had to stop counting when I got to three figures. I reckon I saw 120+ that day – it still seems unusual, but there is obviously something in the pied wagtail calendar that occasionally causes them to gather in numbers.

It’s not just mushrooms and wagtails that are congregating- I’ve only ever seen cattle egrets in ones or twos – but here are eight of them! I reach for my binoculars but I don’t have them – they are in my bag, back in the car. Something startles the birds, probably my frantic rummaging, and they rise as one – pure white against the glowering sky, and fly off further upstream. And I am soon regretting the lack of binoculars again – there is something poking its head out of the river and I hold my breath, wondering if it is an otter. It turns to look at me and slides away with a distinctive flick of its body – it is a seal, albeit a small one. We follow each other for a bit as I carry on walking – it disappears from view for a moment or two before popping up again. This goes on for a few hundred yards before, after one last peek, it sinks into the grey water and I don’t see it again.

This is an odd landscape – the path is at the edge of a field of stubble, the margin of which is home to ancient oaks and hedgerow, brambles and haws and, in some places, bracken. But almost immediately it jumps to a world of reedbeds and marsh. The change from one habitat to the other seems very sudden, with one lovely old oak actually standing amongst the reeds – like a bastion against the encroaching waters. 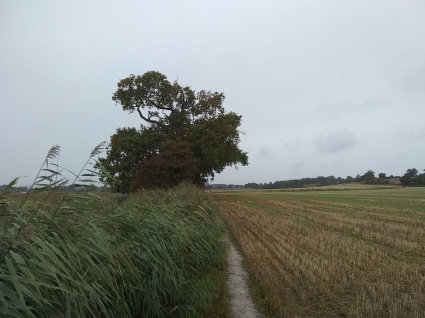 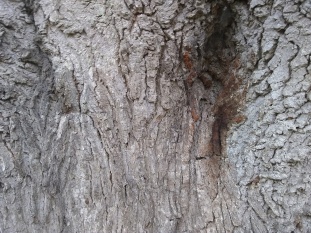 A bit further and I meet my first people of the day – a gang of teenagers, drenched to the skin, covered in mud and staggering under the most enormous rucksacks. A bit of me is glad that I am not encumbered by such baggage but I am also envious – at least they have somewhere to stash their mushrooms. They head off up the road to Pin Mill, the same direction as I am going. However, I look at my map and, seeing that the next two or three miles are going to be a trudge along tarmac, I decide to ditch the plan and instead follow the green path that curves alluringly away to my right. I wipe the rain from my specs and set off inland through the fields.

One thought on “The Shotley Peninsula”