The photographs just jump out at you sometimes, demanding your attention. Small boys on bullocks, portly gents posing proudly with their prize winning sheep; these naturally capture the imagination.

Other times, it is a less immediate thing. Riffling through a box, a thousand glimpses of lives once lived,  you will, all of a sudden, have to go back to look again for an image that has made an impression on your subconscious; a slow burner that has slowly begun to resonate. And so it was with these two, both enjoying their respective days out at the seaside, although perhaps the experience of being photographed not quite so much. 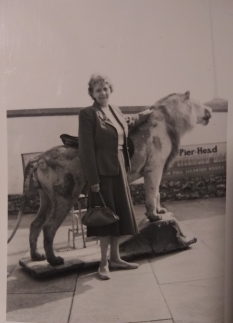 He, resplendent in what can only be a mustard yellow cardigan, is a study in awkwardness – look at how he is holding his hands! There is something of the bachelor uncle about him, a man more at ease with a hobby that keeps him busy in the shed or the attic. A radio ham perhaps – something with valves. Note the immaculate crease on his right sleeve – is this freshly ironed, or straight out of the packet? It’s Sunday best, either way; do we think this a first date? Mind you, that’s a black tie. Could be after a funeral. He is leaning to his left despite standing up straight – a gammy leg which, judging by his age, could well be a war wound; my guess is that he is in his late forties and I assume this photo to be from the early to mid 1960s. There is something of the military bearing about him, a certain pride and defiance in his expression with perhaps the faintest of twinkles in his eye.

She looks uncomfortable too, but this may a consequence of being asked to pose whilst stroking the mangiest flea-bitten old lion imaginable. Her pose is more relaxed than his, she seems more accepting of her lot. “Go on, stand in front of the lion!”. She trudges over dutifully, patient. It looks like the lion has a saddle – she just wants this over and done with before the photographer asks her to climb on. She is also smartly dressed; I reckon she’s on a date too. The same one? Surely not. But what a sad end for that most magnificent of beasts – the salty air and gull guano has done nothing for his pelt.

There is comedy in these pictures and it would be easy to mock, but we are missing a key ingredient; the photographer. The person behind the camera wasn’t laughing – well, they might have been, but they cared for and maybe loved their subject. These were moments to treasure and preserve. Which makes the (re)discovery of these photographs in a box a bittersweet thing. I have written before about the second death of a person; the first being the physical death, and then a second time when the last living person that remembers you dies themselves. But what survives us is love, and there is love in these pictures.

Of course, the other side of that coin is that what also survives is absence. The accumulated loss of loved ones, lovers, what-might-have-beens can be overwhelming, sometimes acutely so. Never forgotten, they live on, always with us, occasionally jabbing us in the ribs with sharp little reminders of what once was. And what are these photos, if not cheerful momento mori – I suspect most of the people in these pictures are no longer with us, nor the photographers, which is presumably why they’ve ended up in these boxes.

I found them in an old church that has been turned into an antiques market in Norwich; a fine city, so I am told. I had no idea how beautiful this place was – the quiet river curves round from the station, encircling the medieval centre that rises up twisty cobbled streets, past the cathedral and hundreds of churches and emerging onto the vast market and castle at the top of the hill. Plenty of bookshops too – a morning of browsing awaited me.

But I was soon distracted by the boxes of photographs that sat among the usual fare; vintage clothes, LPs, collectables and so on, filling every corner of the church – even the crypt. After the discovery of our two new friends, I noticed just how many photographs were taken at the seaside.

This is no great surprise – before flying became affordable, a day out at the coast was a special occasion, be it a first date, the works beano or the family holiday. These were the good times, and worth capturing on film. And although the names of these children buried in the sand might be lost in the mists of time, likewise the identity of Granny and Grandpa snoozing in their deckchairs (the farmer’s tan!), it doesn’t really matter; we recognise them and can smile at their memories which, ultimately, are our memories too.