There is a place in Sussex where the road falls away so suddenly and unexpectedly that, just for a moment, unsuspecting drivers must feel that they have driven over the edge of a cliff. Locals slow almost to a stop, while cars coming the other way, straining up the hill as they shunt through the gears, approach the summit at a similar speed. Much like commuters on the underground, travelling up and down the escalators, motorists get to enjoy a good old gander at their opposite number as they pass slowly by. It was on just such an occasion that I listened to the entirety of Alan Wells’ debut test innings.

I was the barman of an old pub at the foot of Windover Hill, across the fields from Alfriston. There were views to the west, and we were assured by a regular that, on Midsummer’s Eve, the sun would set over the spire of Berwick Church. It didn’t – but, as he pointed out, it rather depended on where you stood.

I was thrilled to discover that Alan was a near neighbour and occasional visitor. He was the swashbuckling captain of Sussex, a run machine with an unwanted sobriquet: “Best Batsman Never to Have Played for England”. We were delighted when, in 1995, he was at last selected. But we hadn’t reckoned on Curtly Ambrose. Only once did I see Ambrose in the flesh, four years earlier at the Oval, the day before Botham couldn’t get his leg over. It was Botham I’d gone to see – but it was the easy rolling action of Ambrose that caught my eye. I was side on to the wicket and able to watch that sinuous run up, seemingly effortless, with no suggestion of haste or hurry, the ball released again and again from the apex well in excess of eight feet. I was smitten.

Ambrose was beginning that run-up as I started the climb. By the time I had reached the top, Alan was walking back to the pavilion. Somewhere in between, he had faced his first ball, and gloved it to Sherwin Campbell at short leg. Meanwhile, in one of those lovely moments of shared experience, I and the driver coming down the hill had simultaneously thrown our heads into our hands as we listened to the disaster unfold on TMS. We exchanged looks, shook our heads and we drove on. The whole county felt his pain: that day, Sussex wept for Alan Wells.

It was among the shorter Test careers, though he did make three not out in the second innings. Later that week, he joined us for a beer. A farm worker who did odd jobs around the place called over: “that fencing Alan – is it to keep the ducks out?”.  As duck jokes go, it was a lame one, but it broke the ice. Alan laughed. I poured his pint and he told us all about it: the day he played for England. 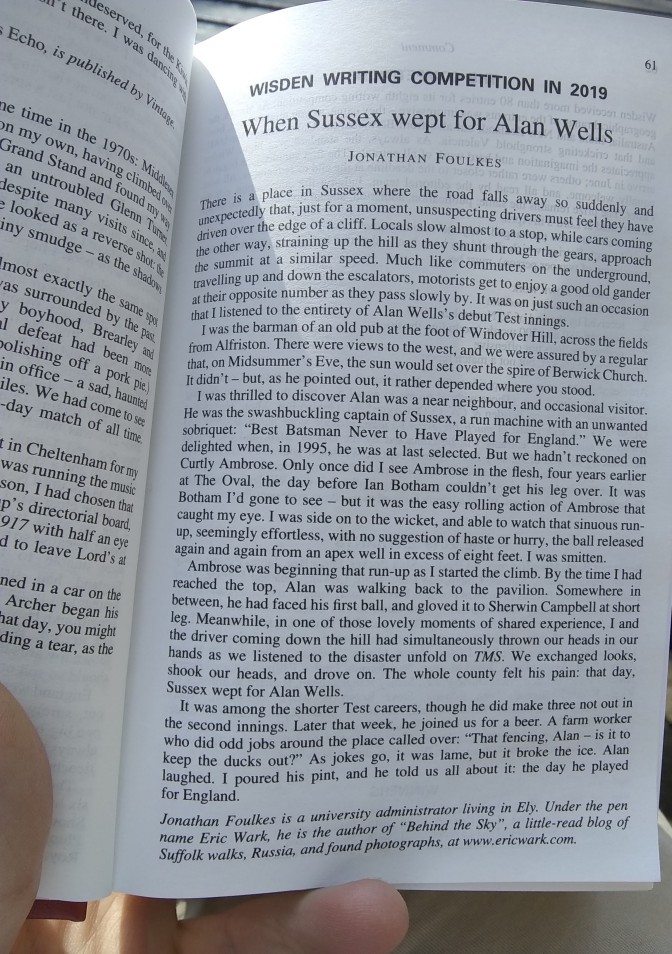 This piece, published under my real name, was the winner of the Wisden Writing Competition, 2019. Published with permission of John Wisden & Co Ltd

There is more sport to be found on Behind the Goal, including this piece on Derek Pringle and a men-at-work sign.

7 thoughts on “When Sussex Wept for Alan Wells”